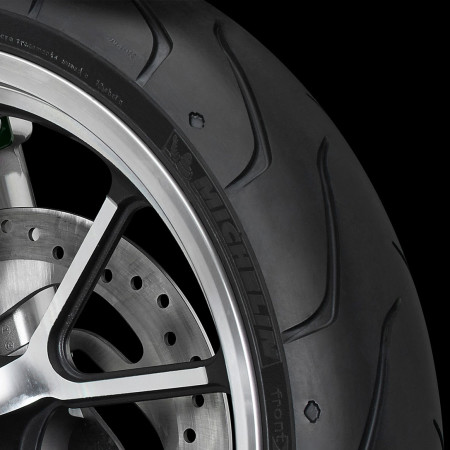 As a Service Consultant, I get asked a million times a season, “How many miles would you say are left on my tires?”

In an earlier blog I wrote about a trip I took to Salt Lake on a whim. Only a week before leaving for that trip I had my bike in a local shop (I won’t name names, but it wasn’t your trusty Harley guys at Cape Cod Harley-Davidson) for a regular service. They replaced the front tire and I asked them to check the back tire. The tire barely had more than 8,000 miles on it, and they told me I had a good 6-7,000 miles left on it, so naturally, I felt confident that my bike was up for the trip west when I spontaneously decided to leave that morning.

I rode hundreds of miles each day, over a thousand a couple of days. I slept on my bike.

The first night I slept on the ground somewhere outside Columbus, Ohio. The second night I was going to sleep on a picnic table on the Missouri/Kansas line, but for fear of my life I ended up racing through Kansas and sleeping in Colorado (this is a thrilling story, but you’ll have to ask me in person to tell it to you!), and by the time I got to Colorado and the sun was rising I was so exhausted I placed one blanket on my gas tank, and pulled another blanket over my shoulders and laid forward on the bike and slept like a baby.

It was so comfortable that the remaining nights I spent on the road were spent on my bike just like that.

Anyway, I digress. I was about 3,000 miles into my trip, now heading back east when my rear tire blew out on the highway. I had worn completely through it!!! AND I was only halfway through the miles that I was told I had left on the tire!

I was furious! I walked my bike two miles to the nearest truck stop (In Iowa I felt very lucky that I was only two miles away). The technicians at the truck stop didn’t have any equipment that could really service a bike, BUT they were all fellow bikers.

One of them jumped into their pick-up truck and drove 70 miles to get a tire for my bike, and 70 miles back. While he was gone the other guys negotiated and debated how to rig up something to lift my bike to do the work.

Ultimately they threw some chains and a pulley over a beam in their shop and hoisted the back end of the bike up. I bought them pizza and beers while they rigged this and tweaked that to make their big rig tools accommodate my motorcycle.

They could see that I was heated at the shop back home that told me I had plenty of tread on my tires. I was angry because their ineptitude could’ve potentially cost me my life, and at the very least cost me a whole day of traveling!

“You can never tell how many miles you have left on a bike tire,” one of he technicians said while swigging a beer.

I didn’t respond because I wanted to stay angry at the guy who said my tire had 6-7,000 miles left on it. (And –I’ll admit- because the tech talking to me looked so much like Sir Ian McKellan that I wanted him to continue speaking in case he suddenly yelled “YOU SHALL NOT PASS!!”)

Instead, he polished off another slice of pizza, then continued, “There are just too many variables to take into consideration. Every rider wears tires differently. Do you check your air pressure every week? Every two weeks? Once a summer? If you go hard into turns your front tire will wear faster. If you’re hard on the throttle your rear tire will wear faster. If there’s a lot of construction where you’re riding this summer you’ll wear through your tires faster than last summer. If it’s hotter this summer than last summer you’ll leave more rubber on the road.”

With each point he made I felt more and more sheepish for being so angry.

He went on, “the only thing you can do is maintain tire pressure frequently, and check your tread depth every thousand miles or so. When the tread depth hits 3/32nds of an inch, change them, no questions asked.” He took another swig. “If you were to ask me how many miles you had left on a tire, I might as well answer ‘fruity trout hair’, for all the good a number would do you.

So now you know.

And, for the record, he did not copyright his speech about every rider wearing tires out differently, which is why that speech probably looked familiar to anyone who has ever asked me how many miles are left on their tires.