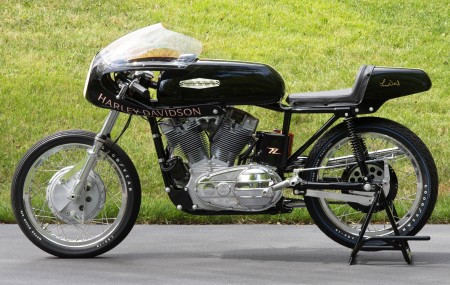 This fall, the Cultural Center of Cape Cod will be filled with an extraordinary exhibit of Harley-Davidson motorcycles and motorcycle art from the collection of David McGraw, who has worked for decades to acquire and restore iconic Harleys and other fine machines. The exhibit will open with a special event, “Leather and Lace,” on Friday, September 20.

“We’ve hosted hundreds of amazing exhibits since we opened in 2007,” says the Center’s Executive Director Robert Nash, “but this one will take the cake. We can’t wait to open our doors to people from all over the world who love motorcycles and see them as beautiful examples of ingenuity, artistic design, and America’s love of the open road.” The exhibit will feature dozens of rare and unusual bikes, including a 1915 K Board Tracker, 1927 Pea Shooter, 1927 Hill Climber, 1928 JDH, 1936 EL Knucklehead, 1949 Flat Track, 1950 Panhead, 1966 CRS Scrambler, 1967 XLRT Lance Weil, 1968 Drag Bike, 1970 XRTT 750 Daytona Roadracer, 1970 XLCH Land Speed Streamliner, a 2005 Destroyer Drag Bike, and many others.

The first bike he purchased was a 1928 Harley “two cam.” Says McGraw, “That one bit me, and I started restoring them. I usually work on four to five motorcycles at once, and it takes me years sometimes to finish a bike.” When he’s restoring a bike, McGraw is both methodical and thorough. “When I find enough parts, I amass everything I need to assemble the bike … but before I restore it I fit everything, do the body work, then take it all apart, clean it up, paint and polish, do the plating, and then put it all together again.”

Taking his father’s suggestion “to pick one thing and try to be a little distinctive,” McGraw says he chose racing machines because “they have a history and they’re hard to find because they’re usually thrown away.” He is focusing on collecting the full era, from start until now, of Harley race bikes. When asked if he’s missing anything, McGraw smiles. “There’s one that’s called the 8-valve Harley, which is the Holy Grail. Don’t have one of those [yet].”

Likewise, the artwork and memorabilia on the walls during Art on Two Wheels is from a collection McGraw assembled with great care and patience. “All the artwork, with the exception of a few things, is original.” The results are incredible and include a cornucopia of paintings, posters, signs, and artifacts.

Lauren Wolk is associate director at the Cultural Center of Cape Cod.

This article was originally published in the Autumn 2019 issue of Antiques & Fine Art magazine, a fully digitized version of which is available at www.afamag.com. AFA is affiliated with Incollect.com.

The exhibition will be held at the Cultural Center of Cape Cod, 307 Old Main Street, South Yarmouth, MA, and opens September 21 and extends through November 24, 2019; there is an opening reception on Friday, September 20. Tickets $10; opening reception $50 . For information, call 508.394.7100  or visit www.cultural-center.org